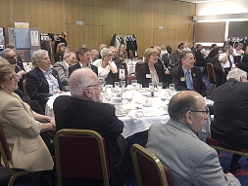 This year, our District Training Session – called District Assembly – was held mid-week at the Royal National Hotel up in the centre of London. As the event was scheduled for the same evening as our Club meets, we decided en masse to attend the District Assembly. In total, 21 Club Members were present at the event. The evening also included a session for the incoming Club Presidents, the Secretaries and the Treasurers. Fortunately, the venue has a very clever partitioning system that allows them to divide the one large room into a number of smaller rooms. Although the evening seemed a little hasty – we did not get access to the room until one hour before the start! – a lot of ground was covered. We all agreed that the experiment had been worth trying, but the amount of training that was delivered was comparatively small. Next year, one of our own members will be planning the event, and we look forward to seeing what is organised for that year.