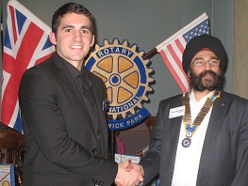 On Wednesday 29 February 2012 our speaker was Rotary Ambassadorial Scholar Dennis Partain. We had waited a long time to hear about his life and his ambitions, and the wait was definitely worth it. Dennis has shown his determination to the members of the Club on many occasions, and on the night he had to battle with Underground closures to get to us. Dennis comes from Redlands in California, USA and he described his background in education, and how on the strong recommendation of his parents, he took time out after completing high school before starting at University. Common enough, you might say, these days but Dennis ended up studying and teaching in Norway, Ukraine, Tanzania and China before making his final choice for his bachelor degrees (yes – he felt able to do two at the same time, one of them spoken entirely in Mandarin Chinese). During his studies he managed to do work placements with WMS and with Genoa Capital. After his studies, he plans to return to California for a year so that Terissa can obtain a National Licence to practice as a Dental Hygienist, and then he hopes that they will be able to travel to Shanghai so that he can use his studies in Chinese and business to good effect.  Dennis brought considerable glamour to his talk, with pictures of his lovely wife Terissa, and humour with his story of the Fall after the Garden of Eden. Truly, Dennis is an ideal scholar, and a wonderful ambassador for Rotary.