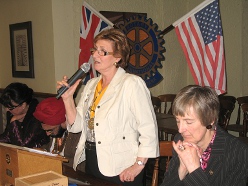 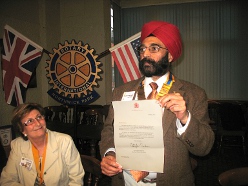 On Wednesday 16 May 2012, instead of a speaker we had our Club Assembly. The Club Assembly is the meeting at which next year’s Service Chairman lay out their plans before the Club, and seek approval from the Club to put their proposed programme into action during the coming Rotary Year.  President Elect Sandy took the chair for that part of the meeting, introducing her charity for the year as the Harrow Association for the Disabled, and outlining a number of changes she has in mind for the Club.  Membership Development will be in the hands of Ros, who introduced her team. Community programmes will be run by John (C), International Programmes by Assistant Governor Helen, Foundation by John (E), and our Youth/New Generations programmes by Di.  Fortunately the budgets were approved, and Fundraising Chairman Sydney now knows what is required next year. Sydney will also look after our Social programme. Once back in the chair towards the end of the evening, President Pushpinder read out a letter the club had received from Buckingham Palace, thanking the Club for its good wishes for the Jubilee celebrations, and wishing the Club good luck at the Swaminarayan School Fete taking place over the same weekend.