In a week that has seen recognition at last by the BBC of Rotary International’s contribution to the eradication of Polio, the Tower of London was lit up on 23 February 2012 with a series of animated slides saying “Thanks Rotary”,  “End Polio Now” and “Thanks for Life”. Sadly, the bulk of people on the South side of the River Thames appeared to be paying no attention to the illuminations. Even those members of the public with cameras were taking photos of Tower Bridge rather than the Tower of London. The purpose was to celebrate Rotary International’s 107th Birthday and there was a VIP party within the Tower of London for some. Owing to the short notice for the event, there was no opportunity to set up teams of Rotarians on Tower Bridge and on the South side of the River to draw the public’s attention to what has been achieved. Maybe that will be considered for a future occasion. Music to go with the slides would have drawn the public’s attention to the display. Now it is back to work! 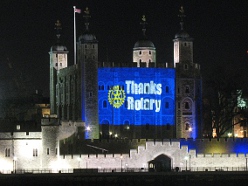 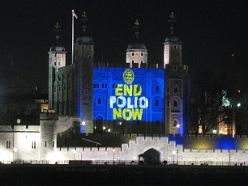 You can see the BBC News Bulletins covering Rotary’s leading role in the Polio Eradication Campaign, and the interview with Rotary International in Great Britain and Ireland President Ray Burman on the Videos Page of our Web Site. 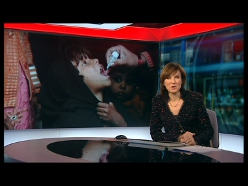 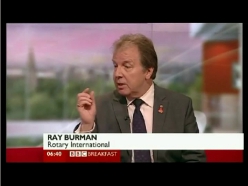