The Metropolitan Line – a lesson from history 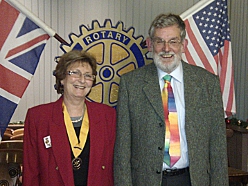 Our speaker on Wednesday 23 November 2011 was Philip Crouch, a retired teacher, who has made an extensive study of the early Metropolitan Railway line in London and came to tell us all about it. Clearly, the story of the development of the Metropolitan Railway has echoes that are relevant to our current economic situation today! We were introduced to “traffic congestion” in the mid-19th century, and the driving entrepreneurial thrust that led to the formation of the North Metropolitan Railway in 1860. The line was built using a Cut and Cover method – the first time a steam railway had been constructed underground through a city centre. The path to completion was not straightforward. There were many objections and protests to what was being built, with complaints about smoke from the locomotives, an edict preventing trains from North London termini continuing to the South of London, and the flooding caused by the Fleet Sewer did nothing to allay the public’s concerns. However, the line was finally opened and immediately proved its worth with more than 4 million fares in the first year. Last year, the railway in its extended form carried more than 53 million fares. Philip is an enthusiast for his subject and has the gift of passing that enthusiasm on to others – well done Philip!