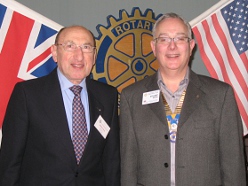 Our speaker on 16th February 2011 was our own member, Arnold Green. Arnold had been recording his family history for a grandchild who had asked about the family, and used his researches for his talk. Arnold took us back to the first arrival of his family in the UK from Poland and from Russia in the 19th Century. Arnold was born in Limehouse, and described his memories of life in the East End, including his first trip to the ” seaside” with Tower Bridge in the background, and the Hurdy Gurdy man who was paid with glass jars – perhaps an example of early recycling. Arnold then described his war experiences with his sister, being evacuated to both Norton-Rodstock, in Somerset and to Windsor. Arnold’s father was not a UK citizen during the war, and so could not serve in the armed services. He volunteered for the Air Raid Wardens, but was denied a position as he was an ‘alien’. He wrote to the Prime Minister and was then allowed to serve as a Warden! Arnold then briefly described how he started work and ended up running two businesses with his wife Adrienne. An interesting talk that touched on many of the themes that Rotary concentrates on. Thank you Arnold and well done!