Our Member Meets the Members! 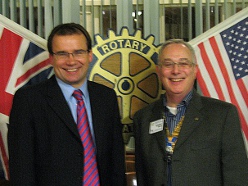 Our speaker on 26 January 2011 was Gareth Thomas MP, the Shadow Minister of State for Universities and Skills Incumbent and member for Harrow West. Gareth had not visited the Club before (although one member claimed he had been invited!) so he took a traditional Rotary approach by talking about his job. He estimates that 40% of his time goes on Surgery work listening to his constituents and following up their queries where possible – he was not able to change the flightpaths into Heathrow and Northolt when one local constituent made such a request! 40% of his time goes on Law Making – holding the government to account through