Dame Reena Keeble – a paradigm for us all 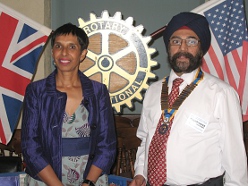 Our speaker on Wednesday 31st August was Dame Reena Keeble PhD. Reena (as Dr Keeble asked us to address her) talked about her background, her work at Cannon Lane First School Pinner, her surprise and excitement at hearing she had been selected for an honour, and what it would mean to her in her remaining career.  After serving as headteacher at a local primary school for 18 years, she described herself as a failure for not progressing on to higher posts – but we soon learnt that her genuine modesty belies a true dedication to realising excellence in early education. She learnt about her honour by letter but was not permitted to tell anyone for a month. The school had its summer fair on the day of the announcement and the staff marked the day with an enormous ‘Dame’ badge for her to wear. The children remember the day since the local ice cream van came into the school playground and all the children were allowed a free ice cream! Reena described the privileges that go with honour, but was acutely aware that there was more work to be done – she is currently assisting the government with the national curriculum for primary schools. A wonderful person who brought her own special outlook to the fore in an inspiring talk. We salute her for all she has done for children in our part of London.

1 Response to Dame Reena Keeble – a paradigm for us all