Community and Social Responsibility at Waitrose 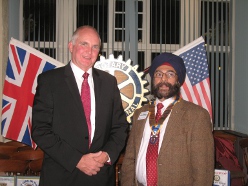 Our speaker on Wednesday 7  September 2011 was Eamonn O’Reilly, the Manager of the Waitrose Supermarket at South Harrow. Eamonn took the opportunity to explain the John Lewis Partnership’s policy on Community and Social Responsibility (CASR) as implemented by the Waitrose store. After a brief history of the Partnership and Waitrose, he took us through the Community Matters programme with the green voting discs given to Customers, and the projects that the store has been involved with in the recent past. While the Partnership funds programmes overseas as well as in the UK, the store concentrates on local charities and good causes. A committee of staff from the store receive applications from local charities, they evaluate the work being done by the charity and then programme which charities will participate in the green disc Community Matters scheme over the coming months. Each month, three new participants take part in the green disc scheme, and according to the voting of the shoppers, a monthly £1,000 is allocated to the three charities. Occasionally, a store can ‘adopt’ a charity and the South Harrow branch has adopted the Colne Valley Special Sailors project. Well done Eamonn and congratulations on the splendid achievements of the Partners – (written by a former Partner! 1965-1970).