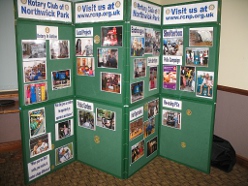 The Club postponed the Dog Racing Evening scheduled for 16 November 2011 and so had to entertain themselves rather than organise a speaker at short notice. With our President recovering from surgery to his shoulder, we were under the close scrutiny of President Elect Sandy. As shown in the pictures above, the Club was presented with a photograph of our visit to the Council Chamber in the Harrow Civic Centre by former mayor and club member Eric Silver. There was also discussion about the layout of the refurbished display boards, with almost everyone having ideas on how the layout and the selection of photographs could be improved. Our thanks go to Eric for the presentation photograph, and to all the club members who have worked so hard on organising, printing and laminating the photographs for the boards. Now where did we put our designs for the new pull-up banners?