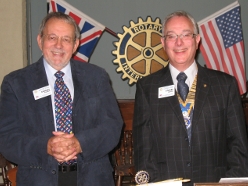 Following the withdrawl at short notice by Alice Gower who was going to speak on Cambodian orphans, our own Sydney Parker sprang to our aid at the last minute to give a “My Job” talk to the Club. Sydney took us back to his origins in South London and his father’s decision to move to North London early on his life. We heard about the school years and early work, followed by his years spent gaining a professional qualification with the Institute of Chartered Accountants England and Wales. Starting several different businesses including a hairdressing salon were next,